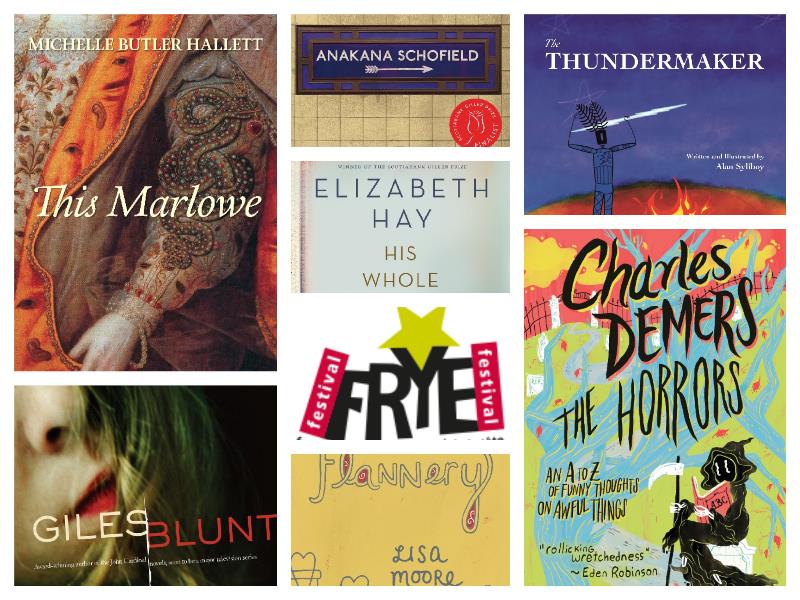 The Frye Festival—Atlantic Canada’s largest celebration of books, ideas and the imagination—announced the line-up of novelists, poets, children’s authors and short story and non-fiction writers who will be in Greater Moncton as part of its 17th edition, April 23 to May 1, 2016.

The program features remarkable storytelling by award-winning authors, the best new voices in Canadian literature and talented international writers. Their stories are heartwarming and heartbreaking, comedic and insightful, and will be featured in more than 70 events. Authors participate in the language in which they write, making most events bilingual. Many events, including all family activities, are free.

Formerly based in NYC and a scriptwriter for Law & Order, Giles Blunt is one of Canada’s top crime novelists and the author of the wildly successful John Cardinal and Lise Delorme series. He brings to the Festival his newest mysteryThe Hesitation Cut, along with his first collection of poetry, Vanishing Act.

St. John’s-based Michelle Butler Hallett is the author of the critically acclaimed novels Deluded Your Sailors, Sky Waves and Double-Blind, and a short story collection. This Marlowe, published this spring with Goose Lane Editions, is her newest novel, brings us to 1593 Elizabethan England in a tale of spies, love, guilt, politics and honour.

Following his award-winning short story collection The Beggar’s Garden,Michael Christie, a former professional skateboarder, published the Giller-longlisted novel If I Fall, If I Die, a coming-of-age story about curious and helmet-clad Will who ventures Outside for the first time since he can remember, leaving the safety of the world he and his loving yet agoraphobic mother have created.

Reminiscent of Colm Tòibìn’s Brooklyn, Dublin-based Mary Costello’s first novel, Academy Street won Novel of the Year from the Irish Book Awards and was shortlisted for the Costa First Novel Award. Costello is also the author of the acclaimed short story collection The China Factory.

Poet Phillip Crymble lives in Fredericton completing a PhD in Literature at UNB and serving as a Poetry Editor for The Fiddlehead. His poems have appeared in magazines in Canada and internationally. His first full-length collection was published in 2015.

Charles Demers, an author, stand-up comedian and frequent guest on CBC’sThe Debaters, shares darkly funny and deeply personal essays in The Horrors: An A to Z of Funny Thoughts on Awful Things about topics as varied and pertinent as depression, obsessive-compulsiveness, communism and adolescence.

Born in Belfast, Michele Forbes is an award-winning theatre, television, and film actress. She studied literature at Trinity College, Dublin and has worked as a literary reviewer for the Irish Times. Her short stories have received the Bryan MacMahon and the Michael McLaverty Awards. Ghost Moth is her first novel.

From Elizabeth Hay, the #1 bestselling and Giller Prize-winning author of Late Nights on Air and Alone in the Classroom, comes a new critically acclaimed novel, His Whole Life, a finalist for the 2015 Rogers Writers’ Trust Fiction Prize. Hay’s fifth novel is a warm coming-of-age story set against the backdrop of the Quebec referendum in the1990s.

Irish author Darragh McKeon’s debut novel All That Is Solid Melts Into Air, a historical epic whose title borrows a line from Marx’s Communist Manifesto, charts the lives of a cast of characters whose lives change in the aftermath of the Chernobyl disaster and collapse of the Soviet Union.

Newfoundland’s Lisa Moore, bestselling author of Caught, February andAlligator, attends the Festival with her first young adult title, Flannery. Sixteen-year-old Flannery Malone gets more than she bargained for when rumour spreads that the love potion she concocted for entrepreneurship class actually works.

Loyalist to a Fault is the third book in Evan Munday’s The Dead Kid Detective Agency series, in which October Schwartz befriends the ghosts of five dead teenagers, each from a different era in the past, to investigate mysteries.

The Winnipeg-based owner of Bedside Press, which specializes in promoting specialty comic book stories, Hope Nicholson is the publisher of the all-female comics anthology The Secret Loves of Geek Girls and the editor of the upcoming Margaret Atwood/Johnnie Christmas graphic novel Angel Catbird.

In Giving Up, a profound debut novel and National Post NP99 Best Books of 2015, Moncton High School graduate Mike Steeves writes a modern couple’s tripartite “he said/she said/they said” narrative that explores how an ambitious generation grapples with failure and the realities of everyday life.

A First Nations artist, activist and musician, Alan Syliboy turns to the indigenous Mi’kmaq petroglyph tradition for inspiration in The Thundermaker, which was inspired from a multimedia art exhibit of the same name based on the story of Little Thunder and the legend of The Stone Canoe.

There is also plenty of talent for children and the young-at-heart. Cybèle Young finds inspiration in seemingly insignificant everyday observations to create intricate worlds and whimsical stories. She has written and illustrated many books, including the award-winning Ten Birds, Pa’s Harvest and Some Things I’ve Lost.

The line-up of Francophone writers is headlined by Acadian novelist Georgette LeBlanc (Le Grand Feu), Congolese novelist Alain Mabanckou (Tomorrow I’ll Be Twenty, Memoirs of a Porcupine, African Psycho), filmmaker and novelistAnaïs Barbeau-Lavalette (La femme qui fuit) and Haitian-born poet Rodney Saint-Éloi. Other Francophone authors whose books are available in translation include Catherine Leroux (The Party Wall), Élise Turcotte(Guyana, The Alien House, The Body’s Place et The Sound of Living Things), and children’s writers Fanny Britt (Jane, the Fox and Me) and Rhéa Dufresne(Feel the Wind and Look at the Sky).

Frye Academy VII
The 2015-2016 edition of Frye Academy concluded on Saturday as Heather O’Neill’s Lullabies for Little Criminals was voted the winner. Heather has been invited to meet with the jury of bilingual high school students and the public during the Festival. Details to follow.

Festival program
The complete schedule of events will be available in early April. The Festival is also on track to reach 10,000 students cross New Brunswick through its TD Writers in the Schools program and various youth programs.

For more information on the 2016 Frye Festival, visit www.frye.ca.