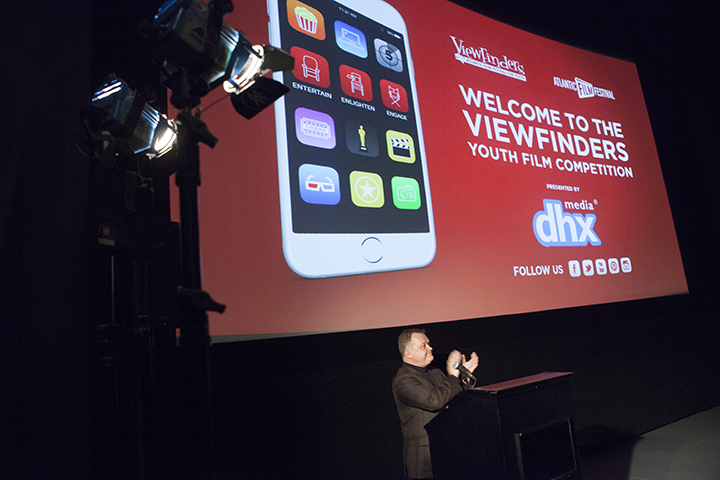 The ViewFinders: Atlantic Film Festival for Youth has just announced its 13th annual Youth Film Competition for Atlantic Canadians ages 18 and under. Deadline for submissions is Monday, May 9th at 5 pm.

Top entries are eligible for prizes that will be awarded at a special red carpet screening at Scotiabank Theatre Halifax on Saturday, June 4th. Prizes will be awarded in three categories, including animation, live action and documentary, as well as a grand prize.

“We’ve seen so many young people get a huge boost from participating in this competition and go on to reach great heights in filmmaking and other endeavours,” said Jason Beaudry, the Atlantic Film Festival’s Program Director. “To have a young person show their work for the first time in front of a large audience is a game changer in many cases. It’s a celebration of remarkable talent and builds confidence in young people that bears fruit for years to come.”

ViewFinders has been hosting competitions for young people with a passion for filmmaking for over a decade. During this time, a number of participants have gone on to film schools and careers in the local film industry.

“ViewFinders was the beginning of my filmmaking passion. I attended a weeklong film camp in the summer of 2012, and I have not looked back,” said Hammonds Plains, Nova Scotia’s Meagan Brown, a past ViewFinders Youth Film Competition participant. “Seeing a film that I had produced, in a movie theatre, motivated me to continue making my own creations. Every year that I continue to submit to the festival, I become more independent, and the quality of my films improves. To me, the best feeling in the world is to sit in the audience and watch how those around me begin to react to my films.”

Brown, who recently learned that she has been accepted into the York University film program, was a 2015 Film Competition winner for her documentary short, Laura’s Dream. “As soon as I met Laura, I was determined that I was going to put my passion to good use and produce a similar, impactful video on behalf of her. Knowing that Laura’s story has touched so many lives, it reassures me that this is the kind of thing that I wish to do for my life,” added Brown.

In March and April, leading up to the Youth Film Competition’s May 9th deadline, the 2016 ViewFinders Tour will be offering a slate of matinee features and short film programs for school groups across the Maritimes, along with a number of filmmaking workshops.

New this year, in addition to activities in the Halifax Regional Municipality, ViewFinders will offer FREE activities for students and teachers at Cineplex Cinemas in Saint John, Charlottetown as well as Yarmouth and Sydney.

Although pre-registration is required, schools attending the 2016 ViewFinders events will only be responsible for the cost of transportation to and from the event.

Bookings are now open for schools that wish to attend.

To register your class for screenings and to learn about the 2016 ViewFinders Tour, please visit: atlanticfilm.com/vf

Each year ViewFinders presents the best in regional, national and international films for youth, tackling issues from multiculturalism and community to sustainability and creativity. The program’s activities introduce the wonderful world of filmmaking through hands-on media workshops, and through film competitions, ViewFinders provides a platform for young filmmakers – a proven launching pad for the next generation of talent.

ViewFinders is the first step in a life full of experiencing and celebrating the art of film and filmmaking.