I had intended to do an overview of the season this week, but the stats are not posted yet, so I’ll try again next week.

However, a general perception is that the Main Southwest Miramichi had the best angling this season.  The Little Southwest was average at best, and the Northwest was poor, certainly in terms of low and warm water to try to fish. 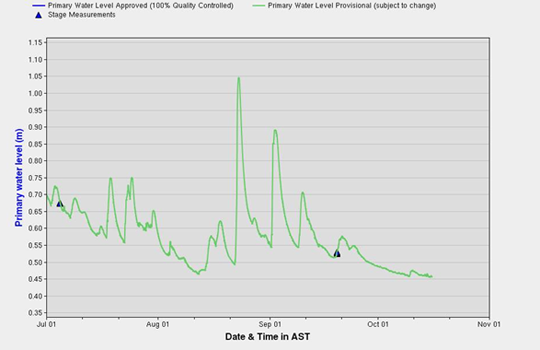 Having said this, the final numbers are still needed to gauge how the number of fish recorded relates to basic spawning requirements needed for the future of the species.  There never seemed to be “big runs” but rather “spurts” of fish coming in sporadically.  There are still fresh fish being recorded at the counting stations.

The rivers that are still open for salmon are the Bartibog, Burnt Church and Tabusintac Rivers which close October 29.

Jim Laws of Miramichi Hunting and Fishing in Newcastle, Miramichi said the striped bass are continuing to move into the Miramichi area.  Angling usually takes place on the falling tide.  Evening fishing is also productive.  Most are using circle hooks with bait, but some are taking the lures and rubber fish.  Laws had heard of one 30-pounder caught.

So get out and enjoy the final weeks of “on the water”.

Thought for the Week: “The season is ended.  There was not enough of it.  There never is”… Nick Lyons

Consider the incredible gift, the privilege we have to angle, land and release these magnificent Atlantic salmon….with the season having drawn to a close in many places, it’s enjoyable to sit quietly fireside and reflect on the journey yet to be undertaken by those that we’ve had to hand this past season, it’s not difficult in a thought filled moment be held in amazement of them, appreciating that which they must endure to accomplish the remainder of their long journey, the return, for which we have held them up for but a brief moment outside of its due course, it’s not at all difficult to envision the obstacles yet ahead and in that once again contemplate their great need for terrific stealth, strength and speed, the very things that draw us time and again to engage them with the fly, for them it is means to find their way back to their aquatic inner sanctum, home, to fulfill the task that gives all of us who consider them and wish them well, hope, for those wonderful riverside moments yet to be in our own days ahead where perhaps by chance one day you will hold the very offspring of that last beautiful fish that left your hands, the one you watched powerfully swim away into the depths of its native element on the very last day of the season somewhere along that river, not so long ago.

Check out ASF’s press release, as well as the study and backgrounders, all available as small pdf documents.
http://asf.ca/regulatory-review-to-improve-management-of-sea-cage-salmon-.html

Don Ivany, ASF’s Director of Programs for Newfoundland and Labrador, describes the report in this short interview:
http://asf.ca/newfoundland-salmon-farm-regulation-comes-up-short.html

Editorial from the Moncton Times & Transcript on the Gardner-Pinfold study and the salmon release at Fundy Park
http://asf.ca/bring-sides-together-to-fight-to-save-salmon.html

The post Miramichi Fishing Report for Thursday, October 20, 2016 appeared first on Giver on the River.