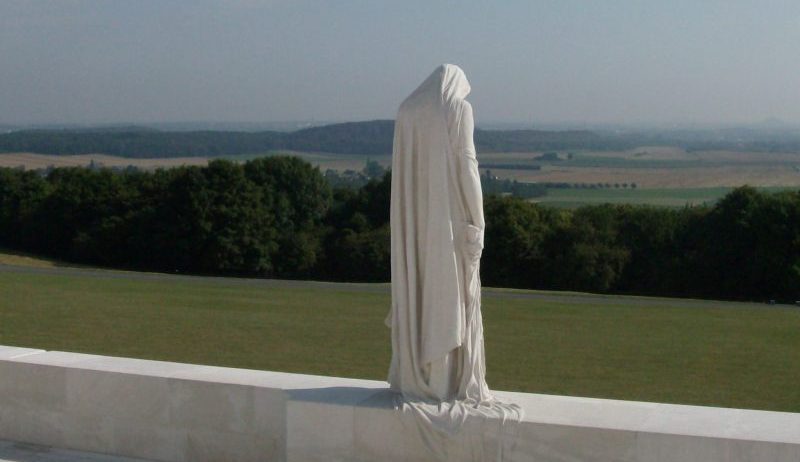 Arrive at Vimy Ridge before the sun rises to 8 am. Arrive while the birds are breaking the silent dawn with song. Arrive while mist still lingers and swirls in the shell craters.

Stand. Face the monument. Be still. Listen. Feel the powerful sense of presence in this sacred place, a presence that is waiting and aware.

Is it the spirits of the 100,000 French casualties who died on their attempts to take the seven kilometre ridge? Have they united with the dead from our own four Canadian divisions? One hundred years ago, our troops succeeded where the larger French and British offensives failed but at great cost of life: 3598 killed and 7000 wounded.

Perhaps the dream by Walter Alward, sculptor of the Vimy Monument speaks to this presence. In an interview in 1921, he said he was inspired by a dream.

“When things were at their blackest in France, I went to sleep one night after dreaming of the muck and misery over there … my spirit was like a thing tormented … I dreamed I was in a great battlefield. I saw our men going in by the thousands and being mowed down by the sickles of death … Suffering beyond endurance at the sight, I turned my eyes and found myself looking down an avenue of poplars. Suddenly through the avenue I saw thousands marching to the aid of our armies. They were the dead. They rose in masses, filed silently by and entered the fight to aid the living. So vivid was this impression that when I awoke it stayed with me for months. Without the dead we were helpless. So I have tried to show this monument to Canada’s fallen, what we owed them and would forever owe them.”

You can walk through several trenches lined in neat stone, long clean of the muck, blood and bodies. On your way to the monument, you can mark the shell craters lined with grass and wild flowers. They are behind a wire barrier; many of the fields are still alive with unexploded ordnance.

Even at a distance the monument is massive, and overwhelming in beauty and significance on arrival.

It marks the 11,285 Canadian soldiers who have no known graves. Thousands make pilgrimage yearly. Read the names. Marvel at the figures vision of Alward. Stand beside the figure of “Canada Mourning her Sons” as she looks down on the Douai Plains 145 metres below. The monument was placed here where the Canadians captured the highest point of the ridge in a frontal bayonet charge against machine gun positions.

Think of what this place means to Canadians, to the descendants of the soldiers, to you. Spend time.

When you leave Vimy, you will discover that Vimy Ridge will never leave you.

The post Vimy Ridge Never Leaves You appeared first on Giver on the River.