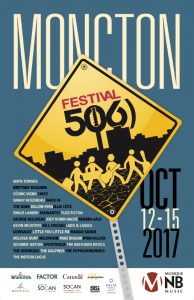 Thirty-two bands and solos artists from all over the province will congregate in Moncton to take part in this annual celebration of homegrown talent. “Those of us working in the music industry know all the incredible work our New Brunswick artists are doing,” says Jean Surette, executive director of Music•Musique NB (MNB). “It’s a pleasure for us to offer a stage for them to shine!”

The mixed programming include all-star The Motorleague, in their first Moncton concert since their revised formation, as well as Kill Chicago, 2016 Prix MNB Award Winner for Album of the Year. Performing their first MNB showcase will be Edmundston newcomers Spoutnique, and returning for a second year, Miramichi band Lionsault, who made a splash at this year’s ECMA in Saint John. The jam-packed line-up will also include folk musician Maggie Savoie, indie favourite Little You Little Me, country singer Melissa Hunt and Acadian traditional group, Seconde Nation.

Festival (506) is made possible thanks to numerous partners such as the Government of New Brunswick and the City of Moncton. We acknowledge the financial support of FACTOR, Musicaction, the Government of Canada and of Canada’s private radio broadcasters. Music•Musique NB would also like to thank SOCAN and the SOCAN Foundation.