MIRAMICHI – Generally, there are some fish in the system, both fresh and old. The night-time water temperatures are the saving grace for the fish as most rivers, particularly the tributaries, are extremely low.

I won’t complain about the little rain we did get last weekend, but I will about what we didn’t get. Most long-range forecasts have included decent amounts, but by the time the day comes for it to fall, most has vanished. I said to one of my river contacts that he should do a rain-dance. He replied:

“I can’t, Doug. My feet are worn out from trying.”

So, it becomes a waiting game. I am sure the fall run is idling somewhere in the bay just waiting to kick into gear once we do get a day or three of decent steady rain. When that happens, as it says in “A Field of Dreams”, “Then they will come!”

W. W. Doak and Sons in Doaktown said there were a few fish being caught above Boiestown, but in the Doaktown area itself, there were some fish around, but catching them was a challenge. Obviously, the water was quite low with adequate night temperatures being a buffer.

Flies of choice were small and dark in wets such as Undertakers and White-tailed Green Machines on nos. 8 & 10 hooks, along with a variety of Bombers and dry flies.

Flies of choice were small Smurfs and Undertakers on nos. 10 & 12 hooks, along withBombers (Brown & Orange and Blue ones)

Herb Barry Sr. of Herb’s Fly Shop on the Station Road in Blackville said angling was very quiet. He hadn’t heard of any being caught, although there were some around, and to make matters worse, there were darn few anglers even out. The rivers were low and in desperate need of rain.

Curtis Miramichi River Outfitting in Blackville said angling was pretty slow, but there had been some fresh grilse caught Saturday in the Quarryville area. Not many anglers were on the water which was low and getting warm. The fish were being seen, but holding rather than moving.

Jim Laws of Miramichi Hunting and Fishing in Newcastle, Miramichi reported fishing as pretty quiet with only an odd taker and few anglers out. Fish were being seen. The water was very low and the temperature average at best.

Flies of choice were small Bugs on nos. 8 & 10 hooks, along with Bombers.

Syd Matchett of Trout Brook Fly Shop on the Northwest Miramichi said angling was pretty slow, but fish were being seen and an odd one was being caught. There had been a grilse hooked Saturday and a couple of salmon seen. He was praying for rain, but his knees were getting pretty sore from doing it.

Flies of choice were small Bombers with Brown & orange and Green with orange.

Debbie Norton of Upper Oxbow Outdoor Adventures on the Little Southwest Miramichi said angling was tough, but there were fish around. They had caught a small salmon on Monday. Fish were coming into the system, but were waiting for better conditions before double-clutching and heading up river. The water was low and temperatures were enough for the fish to get by on. She was expecting a good fall run once conditions change.

Flies of choice were Green Machines with white ails and Krystal Flash, Shady Ladies and Bear Hairs on no. 10 hooks along with some Bombers.

In conclusion, the fish are far from stupid. They understand Mother Nature’s ways much better than we do, and they are willing to wait until conditions improve. Then they’ll be on the move and we’ll be back “on the water”.

Thought for the Week: “There’s always a hot new fly. Precious few of these patterns are genuine breakthroughs destined to last for a hundred years, but more often they’re idle comments on existing traditions, explorations of half-baked theories, attempts to use new and interesting materials, to impress other tiers, or excuses to rename old patterns. The results are often pointless fads like the craze in some pretentious restaurants of plopping fried quail eggs on everything or calling sandwiches “paninis.” – John Gierach

The rivers remain low but temperatures have cooled off and fish have moved out of the cold water refuge pools, hopefully making their way to the headwaters. The MSA Field Crew has begun electrofishing, focusing on areas upstream of beaver dams that were removed in the fall of 2016, and on stocking sites from 2016 and 2017. Our cold water refuge projects completed in 2016 were revisited and preparation for work on Salmon Brook on the Cains and Hudson Brook on the Southwest has begun. The hatchery remains busy with three year classes of salmon on site and preparation for the release of our first adults in September. Construction continues on site as we ramp up the Salmon Adult Supplementation – CAST project. For more information on CAST visit their site at www.castforsalmon.com.

As of Aug 13rd the Dungarvon Barrier is on par with last years numbers as far as total number of fish, while the Northwest Barrier is still behind. In both cases the number of large salmon is greater then last year and the number of grilse is significantly less.

The tables below show grilse at salmon numbers at the barrier and trap as of July 31st for each time period. 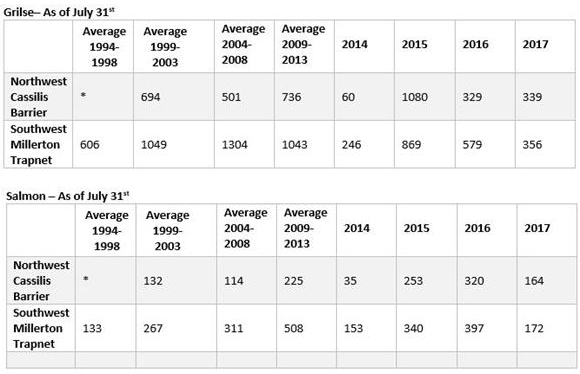 Fredericton Conservation Dinner
The 22nd Annual Fredericton MSA Conservation Dinner will be held on Thursday, September 21st at the Fredericton Inn. The reception will begin at 5:30pm with the dinner at 7:00pm followed by the live auction. For more information or to purchase tickets please contact Kate Flanagan at kate@miramichisalmon.ca or at 506-622-4000.

Renew or Join Now
If you haven’t renewed your membership yet, or if you would like to become a member of the MSA, simply go to our website at Join or Renew Now. All membership and fundraising revenues generated by the MSA are used to fund on-the-river programs and research activities aimed at protecting, preserving and enhancing the wild Atlantic salmon and its habitat in the Miramichi watershed.

Yours in conservation,
Nola

The post Miramichi Fishing Report for Thursday, August 24, 2017 appeared first on Giver on the River.