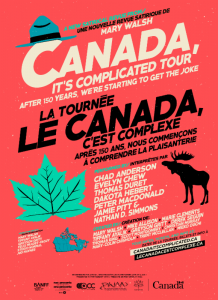 Featuring sketches and satirical songs that examine the joys, foibles, tragedies, and triumphs of Canada, the show was written by some of the country’s leading comedians, musicians, and playwrights. It stars a diverse cast of young, up-and-coming performers and is staged as a truly unique multimedia stage experience.

Canada, It’s Complicated comes to the Imperial Theatre on Thursday, September 21st at 7:30 pm. Tickets are $20 per person. This performance is recommended for children 14+.