Flanker Press recently released an invaluable book penned by Jim Wellman of twenty-eight fascinating profiles of people who are (or were) involved with the modern ocean fishery industry in one way or another. There are stories of lives lived on the sea, lives lost at sea, lives saved at sea, boat builders, both young and old, women who fish or who are instrumental in promoting the fishing industry, even lobbying in Ottawa for various reasons, all on behalf of the fishing industry. There is the youngest ever captain of the Coast Guard, a woman who works with miles of twine, making nets and even CBC personalities who were the voice of fishermen on radio and television.

One example of the profiles in this collection is “The Bearded Skipper”. Here is an excerpt:

Norman Peters is well-known for many fine attributes, but none as distinguishable as his white whiskers.
The seventy-eight-year-old fisherman from North Rustico, Prince Edward Island, was also crafty enough to turn his meticulously groomed facial hair into a business. For years he owned a fisheries charter company called Bearded Skipper’s Deep Sea Fishing & Tuna Charters.
Norm gave up the business a few years ago, but he still hands out his business card that now reads simply “The Bearded Skipper.” The reason is simple: Norm has what everyone perceives to be the perfect sea-captain image.
Adorning his blue captain’s cap, Norm has become the face of PEI fisheries, a mascot of sorts, although, with a tinge of irony, many people think he is the model for Captain High Liner, the image of a bearded old salt seen on many of the High Liner Foods company’s fish packaging. High Liner Foods is based in Lunenburg, Nova Scotia.
“A lot of people ask me that, but I’ve never talked to anyone from High Liner, except once in a casual chance meeting with someone who worked with them, and it was mentioned in passing, but that’s all,” Norm says.
The Bearded Skipper’s high profile earned him a couple of interesting work gigs in recent years. He was asked to attend a fisheries trade show in China in November 2012, where he was a huge hit.

This was a fascinating book to read. It is also a reminder that the sea can take as much as it gives and living and working on it requires caution and a healthy dose of respect. The Call of the Ocean is a laudable tribute to the men and women, modern-day heroes if you will, who have spent or given their lives working on the exacting North Atlantic ocean. 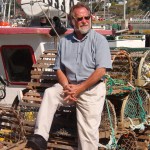 Jim Wellman grew up in Port Anson, a small fishing and logging community on Newfoundland’s northeast coast. The son of a schooner captain, Jim never strayed far from his marine roots despite choosing a career in journalism. For fifteen years, Jim was host of the popular radio program the Fisheries Broadcast on CBC Radio in Newfoundland. After taking an early retirement from the radio business in 1997, Jim turned off the microphone and picked up a pen. He has written nine books with marine connections. In November 2002, Jim became managing editor of the Navigator, Atlantic Canada’s premier fisheries and marine magazine.

The post Book Review: “The Call of the Ocean” by Jim Wellman appeared first on Giver on the River.