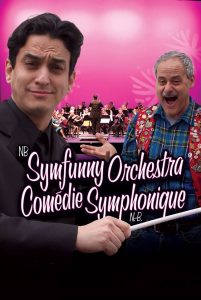 This brand-new production of music and comedy combines the talents of Marshall Button (a.k.a. Lucien) writer of the show and Maestro Antonio Delgado (NBYO Music Director) the musical arranger. Button and Delgado are supported by a dynamic 32-piece orchestra comprised of the Teaching Artists of Sistema NB and the New Brunswick Youth Orchestra as well as a troupe of comedic actors including comedy veteran (and Moncton’s Deputy Mayor) Blair Lawrence and musical theatre dynamo Mélanie LeBlanc who will provide for an unforgettable evening of great music and big belly laughs.