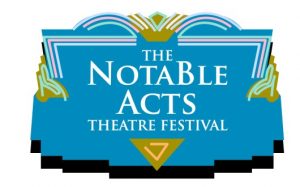 THE 2017 NOTABLE ACTS PLAYWRITING CONTEST IS OFF AND RUNNING!

The NotaBle Acts Theatre Company is once again searching for great new plays by New Brunswick playwrights, to be staged at our sixteenth annual Summer Theatre Festival in Fredericton, set to run July 26th to August 5th.

NotaBle Acts is celebrating its sixteenth anniversary in 2017. Over that time, we have presented an amazing 199 new plays by 90 different New Brunswick playwrights at our annual festival.

If you’d like to add to those numbers and become part of this year’s lineup, we are now inviting submissions to our annual playwriting contest, in five separate categories. Our Site-Specific series seeks 15-30 minute scripts, to be set in unconventional public locations in Fredericton. The Taking it to the Streets category seeks 7-10 minute scripts for production outdoors in downtown Fredericton, with four winners selected. The third category, Acting Out, is for submissions of one-act plays 30-60 minutes in length, with two winners selected for workshop productions and up to four runners-up to receive readings at the festival.

Click here to find full information on all contest categories, along with submission rules and guidelines. Questions about the contest can be directed to NB Acts Artistic Director, Len Falkenstein, at lfalken@unb.ca, or (506) 458-7406.