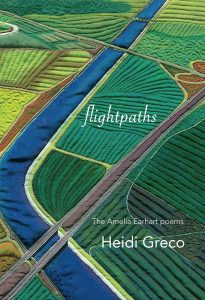 July 2, 2017, marked the eightieth year of Amelia Earhart’s disappearance while flying over the Pacific Ocean.  Ms Earhart was not alone; along with her was navigator Fred Noonan.  I was eager to read Flightpaths (2017, Caitlin Press) a structured prose-with-poetry composition by Ms Greco subtitled The Lost Journals of Amelia Earhart. It seemed like a challenging endeavour to take bits and pieces of the famed flyer’s life and, along with some fictional touches, flesh out a theory or two on what really happened that fateful day. Did they crash land on a reef near Gardner Island, only to slowly die as castaways? Or were they captured by the Japanese Navy as spies and held prisoner on a remote island? Ms Greco explores these themes and a few others (including a stint in Toronto as a nurse’s aide and as her relationship with Eleanor Roosevelt and her marriage to GP Putnam) in Flightpaths:

Some day I might learn about
the party sent to find us.
No doubt the biggest in history.

Countless ships and planes engaged
in search of an enemy.

Our gal Amelia the public excuse
as they scatter across the sea
in headlines blackened with lies.

Convoys combing waves
for the needle they had planted
in a haystack they’d quietly
agreed to move.
(from “Cipher”)

Ms Greco’s poems (written from Amelia’s point of view) are interspersed with fictional journal-like entries of Amelia’s last days on a bit of an island that she thought was Howland Island, her intended destination.

I fear we are farther south than planned
two vagabonds astray,
riding the belt of the Equator.
(from “Course Correction”)

I am not one to read a lot of poetry, but when combined with contextual passages and based on a historical event, my interest was piqued and my imagination stimulated by the fascinating concept that Ms Greco has penned. Flightpaths adroitly employs poetry that is easily accessible to those who may otherwise not have a taste for it and surely the subject will be of interest to those who continue to be fascinated by the Amelia Earhart story-myth. Recommended.

Flightpaths by Heidi Greco is available at Amazon.ca
Caitlin Press

Heidi Greco is a longtime resident of Surrey, BC. In addition to writing and editing, she’s been an advocate for the literary arts in her community and was instrumental in establishing two distinct reading series. But she considers her greatest success to have been convincing her city to hire an official Poet Laureate. She writes in many genres – with poems, fiction, essays and book reviews to her credit. Her books include a novella, Shrinking Violets which was co-winner of the Ken Klonsky Award in 2011.

The post Book Review: “Flightpaths” by Heidi Greco appeared first on Giver on the River.