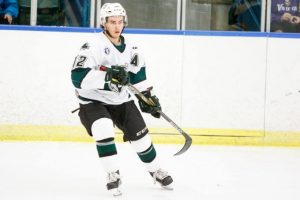 The MHL has revealed their Gongshow Three Stars of the Month for January, 2017.

This month’s second star is forward Jarred Toole of the Woodstock Slammers. In nine games, the 21 year old from Bonshaw, PEI scored six goals and added seven assists. Toole produced a pair of four point games during the month, firing a hat trick and adding an assist against the Dieppe Commandos on January 8th as well as a one goal, three assist performance on January 20th against the Valley Wildcats. The second year MHLer, who was also named the second star of the month for November, currently leads the Slammers with 48 points in 34 games through the end of January.

The first star goes to Truro Bearcats forward Kyle Tibbo. In eight games during the month, the 20 year old from Conception Bay South, Newfoundland scored ten goals and added six assists. From January 14th-27th, Tibbo registered five consecutive multi-point games, including a hat trick and an assist on January 15th against the Valley Wildcats and a goal and three assists versus the Summerside Western Capitals on January 19th. Tibbo, who previously won a Kent Cup Championship with the Bearcats in 2014, found himself tied for the league lead in points at the end of January with 67. His 34 goals also led the MHL. This is Tibbo’s second appearance in the MHL’s Three Stars of the Month selection this season, having previously been named the league’s second star in October.

The third star of the month for January is Yarmouth Mariners’ goaltender Justin Ritcey. In four appearances during the month, the 20 year old from Halifax, Nova Scotia went 3-0 with a 1.75 GAA and .921 save percentage. Acquired from the Valley Wildcats on January 2nd, Ritcey made an impact in his very first start with the Mariners, stopping all 27 shots he faced in a 5-0 shutout victory over the Yarmouth Mariners. On January 20th, his 37 save performance helped paved the way to a Yarmouth victory over the South Shore Lumberjacks. Currently sitting second in the league in minutes played, Ritcey has been a key contributor since his arrival in Yarmouth in helping the Mariners maintain their league lead in team GAA.

← Planning for university: What the experience of recent graduates tell us
Blue Rodeo Date Change for Woodstock, New Brunswick Show →